The history of hats is so long and has been part of our wardrobe for thousands of years. In time many designs have appeared and disappeared, only to reappear again. In the 16th century, women began to wear structured hats, similar to those that were worn by men. In the 18th century, milliners started appearing, usually, women, that created hats and bonnets but also designing overall styles. Materials of the highest quality and best hats came from the Italian city of Milan. That is where the term “milliner” comes from. 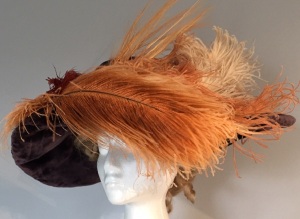 With this in mind, the New Cannan Historical Society has organized an exhibition from November 15-March 1, 2020 called Hat Madness. “Mad as a Hatter” was a term used to describe dementia experienced by men in the hat-making business. The mercury used in the production of felt, which was then used for hats, caused the problem. In the 19th century, the Danbury Hatters experienced what was then called the “Danbury Shakes.” Without labor laws to protect them, these workers struggled to keep up with production as they lost their minds.

In Hat Madness, the New Canaan Museum & Historical Society opens up its extensive clothing and textile collection to explore the history of hats, hat design and hat-making. From the simple bonnets worn in Colonial times to stunning pieces of art that were popular in the 1920s to the “Pussy Cap” of the 2017 Women’s March, this exhibition spans more than 200 years. Period garments and related accessories will also be on display.

The show is curated by Penny Havard and runs through March 1, 2020. Opening Reception Friday,

A jewelry-making workshop at The Institute for American Indian Studies on Sunday, January 29 - just in time for Valentine's Day! For all the details check out our new blog https://westernconnecticut.blogspot.com/2023/01/jewelry-workshop-just-in-time-for.html
Did you know that solo travel is on the rise? Check out our new blog to see what's hot according to #ToursofDistinction a Connecticut Tour Operator that has been in business for 51 years! https://westernconnecticut.blogspot.com/2023/01/solo-travel-growing-trend-in-2023.html
PALACE THEATER ANNUAL RAFFLE LAUNCH - CASH, GIFT CARDS & 22kt GOLD BRACELETS AMONG THE PRIZES- CHECK OUT OUR BLOG FOR THE DETAILS
From the #instituteforamericanindianstudies #MedicinalMonday- Despite its name, Winged Buckwheat is not a type of wheat. As a matter of fact, it isn't even a grain! Find out all about this plant and how Native American communities used it in our new blog https://nativeamericanmuseum.blogspot.com/2023/01/medicinal-monday-winged-buckwheat.html
One of Connecticut's most historic furniture companies, The Hitchcock Chair Company is having its grand opening on Saturday, January 21, from 10 - 4, Sunday, Sunday, January 22, from 12 - 4, and Monday, January 23 from 10 - 4. The new location is 107 John Groppo Drive, Winsted, 06098. For more info www.hitchcockchair.com
#MedicinalMonday If you happen to be out hiking in the Appalachian Mountains, you may come across a small pine tree, known as the Table Mountain Pine with amazingly spikey pine cones that look as though they might hurt if you touch them the wrong way. Table Mountain Pine trees have a fairly small range and Native American communities found both medicinal and practical uses for this small, and sometimes an irregularly shaped tree.https://nativeamericanmuseum.blogspot.com/
Join 6,650 other subscribers
Loading Comments...
%d bloggers like this: