Connecticut’s Beardsley Zoo announced today an opportunity for the public to choose a name for the female baby Giant anteater born on June 15, 2021. In December, the Zoo received verification from the Association of Zoos and Aquariums’ (AZA) Anteater Advisory Group that the Giant anteater pup is a girl. Voters can go to the Zoo’s website at http://www.beardsleyzoo.org and choose from three names selected by the anteaters’ animal care staff. Voting begins on Thursday, January 13, and ends at noon on Friday, January 21. 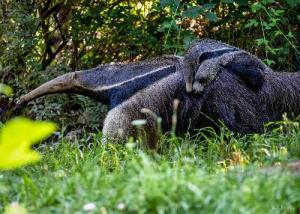 The proposed names are:
Andarilho: Portuguese for “wanderer”
Corajosa: Portuguese for brave, bold, valiant
Chili: A small hot-tasting pod of a variety of capsicum, used in sauces and relishes.

Giant anteaters, unlike most mammalian species, are not easy to sex from their body size, color, and external genitalia. That the baby’s gender is female is welcome news for the species, as the population in Giant anteaters is skewed more heavily toward males than females.

“We couldn’t be happier that our Giant anteater baby is a girl, important for the continuation of this vulnerable species,” explained Zoo Director Gregg Dancho. “Now we’re asking the public to help choose her name. Voting is free on our website at beardsleyzoo.org.”

The baby, born after a 75-day gestation period, is increasingly independent. She occasionally rides on her mother’s back, but she spends more time on her own as she grows. In addition to nursing, she now is fed a mixture of grain and water in a smoothie, the same formulation given to her parents. At nine days old, the baby weighed 4.3 pounds. On December 21, she weighed 45 pounds. 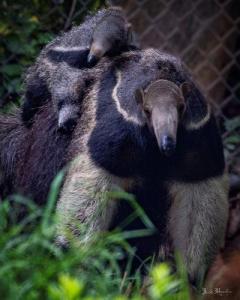 This is the third Giant anteater baby born at the Zoo to third-time dad, E.O., and fourth-time mom, Pana. The pair was brought to Connecticut’s only Zoo with the hopes of successful breeding, which occurred for the first time in 2016.
Mochilla, the pair’s first offspring, is now in residence at Alexandria Zoo in Louisiana. The second-born, Tupi, is now at the Nashville Zoo in Tennessee.

The Giant anteater’s parents came to the Zoo from Palm Beach Zoo in Palm Beach, Florida. Both Pana and EO are twelve years old. They arrived in late May 2015 and are a highlight of the Pampas Plains habitat, which opened in August 2015.

Giant anteaters can live up to 26 years in human care and are usually solitary animals. They weigh up to 100 pounds and are five to seven feet long. Their home range is from southern Belize to northern Argentina, and they live in grasslands, humid forests, and woodland areas. Anteaters have one of the lowest body temperatures in the animal kingdom at 91 to 97 degrees Fahrenheit and can eat up to 30,000 ants per meal in the wild. The Latin name for anteater is Vermillingua, meaning “worm tongue,” which can be as long as two feet.

Let your curiosity run wild! Connecticut’s only zoo, celebrating its 100thth year, features 350 animals representing primarily North and South American and Northern Asian species. Guests won’t want to miss our Amur tigers and leopards, maned wolves, Mexican gray wolves, and red wolves. Other highlights include our Spider Monkey Habitat, the prairie dog exhibit, and the Pampas Plain with Giant anteaters and Chacoan peccaries. Guests can grab a bite from the Peacock Café and eat in the Picnic Grove. Connecticut’s Beardsley Zoo is a non-profit organization celebrating its Centennial year when the mission of helping fragile wildlife populations and ecosystems is more important than ever.

Tickets must be purchased on the Zoo’s website at beardsleyzoo.org: we recommend that guests continue to wear masks while visiting the Zoo, but when guests are outside and are able to maintain social distance, masks may be removed. In any indoor area, or when social distancing cannot be maintained, masks are required. Everyone over the age of two, except for those with medical conditions that preclude wearing them, should have a mask available.

It is #nationalplanyourvationday today... check out our new blog for some wonderful travel ideas... don't know where to go... take the quizz! https://www.toursofdistinction.net/blog/planning-your-trip/
Valentine's Day is around the corner. It is never too early to start looking for gifts. We have five suggestions for gift giving for that someone special in your life! Check out our new blog and let us know if you have any other suggestions! https://westernconnecticut.blogspot.com/2021/12/five-gift-ideas-for-valentines-day.html
Do you like to play with snakes? If you do, don’t miss the snow snake workshop on Saturday, January 29 at 11 a.m. and at 2 p.m. at the Institute for American Indian Studies on 38 Curtis Road in Washington. At this special Native American workshop, you will make a “snow snake” and use it to play a traditional Haudenosaunee (Iroquois) winter game. For information check out our new blog https://westernconnecticut.blogspot.com/2022/01/play-snow-snakes-traditional-native.html
#TraveltipTuesday...do you know what to pack in your first aid kit? Our new blog is a great checklist on what you should pack for common medical emergencies. https://todct.us/firstaidkit
#MedicinalMonday - Smoking was and continues to be a part of all Native American ceremonies and medicinal remedies. This week find out about kinnikinnick in our new blog. https://nativeamericanmuseum.blogspot.com/2022/01/medicinal-mondaythe-ceremonial-smoke-of.html
Spooky and Abandoned...Ansonia's legendary Opera House... check out our new blog https://westernconnecticut.blogspot.com/2022/01/ansonias-legendary-opera-house.html (Photos courtesy Anthony Mullin)
Loading Comments...
%d bloggers like this: