Five animal candidates are vying for the much sought-after title of Mayor of Connecticut’s Beardsley Zoo. This important election will decide the Zoo’s second Mayor, the highest-ranking animal official who will showcase the important role of animal ambassadors. Last year’s winner, Wiggles the Chinchilla, died in office, and runner-up Kallisto the Amur leopard is completing Wiggles’ term.

The five candidates who have made it past this year’s primary rounds to the general election are:

· Harry the Guinea Hog piglet. As the youngest candidate to enter the race, Harry has a maturity beyond his months. He demonstrates a remarkable ability to negotiate with his littermates on issues ranging from what to eat and when to eat it to what to roll in and how to roll in it. It’s rumored that there was a spiderweb in the barn that read “some pig.” This has not been verified. 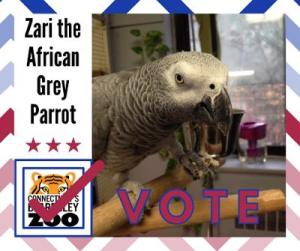 · Zari the African Grey Parrot. As a long-time animal ambassador and a veteran of ZooMobile visits to senior centers as well as starring roles at children’s birthday parties, Zari has a calm demeanor and rarely flies off the handle. Her campaign slogan is “a bird on the hand is worth two of the other candidates.” 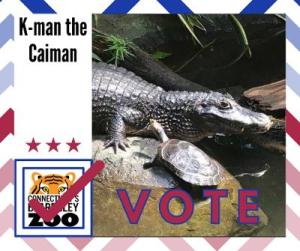 · K-Man the Yacare Caiman. Sometimes called the “piranha caiman” as yacare caimans are known to snack on the razor-toothed fish, K-Man’s campaign materials claim this ability makes him the perfect choice for choppy political waters. He says he is looking forward to sinking his teeth into the job of mayor.

· Jolene the Whistling duck. Jolene is a natural politician, and as such, has decided to put her wing in the ring for a second run at mayor. Sociable, boisterous, and noisy, she has openly supported the rights of ducks who prefer to walk on land as well as those who prefer to perch in trees. She considers all animals equal under the law.

· Clara the American Bison. As the country’s national mammal and official symbol of the country along with the bald eagle, Clara says that she has the dignity and gravitas demanded of a zoo mayor. A devoted single mother, Clara wants voters to know that she can run up to 35 mph, is extremely agile, and can spin around quickly. She calls her ability to spin an advantage in seeing all sides of an issue.

“Once again, the race for Mayor of Connecticut’s Beardsley Zoo is highly contested as each candidate attempts to win the support of voters,” said Zoo Director Gregg Dancho. “Unlike other elections, we encourage people to vote early, vote often, and stuff the ballot box.”

The winning Mayor will hold a 12-month term. All donations to the ballot box will be used to support the Zoo’s mission of conservation, education, research, and fun.

Let your curiosity run wild! Connecticut’s only zoo, celebrating its 99th year, features 350 animals representing primarily North and South American and Northern Asian species. Guests won’t want to miss our Amur tigers and leopards, maned wolves, Mexican gray wolves, and red wolves. Other highlights include our new Spider Monkey Habitat, the Rainforest Building, the prairie dog exhibit, and the Pampas Plain with Giant anteaters and Chacoan peccaries. Guests can ride on the carousel, grab a bite from the Peacock Café and eat in the Picnic Grove. Connecticut’s Beardsley Zoo is a non-profit organization approaching its 100th year at a time when the mission of helping fragile wildlife populations and ecosystems is more important than ever.

Tickets must be purchased on the Zoo’s website at beardsleyzoo.org. In accordance with the state of Connecticut COVID-19 guidelines: we recommend that guests continue to wear masks while visiting the Zoo, but when guests are outside and can maintain social distance, masks may be removed. In any indoor area, or when social distancing cannot be maintained, masks are required. Everyone over the age of two, with the exception of those with medical conditions that preclude wearing them, should have a mask available.