The Warner Theatre will present the next production of the 9th Annual International Playwrights Festival – PUT ON A GRUMPY FACE by Reed Halvorson (SC) – from the Warner’s Nancy Marine Studio Theatre beginning Friday, January 1 at 7:00 pm. In response to the Covid-19 pandemic, the International Playwrights Festival will be a virtual event – each production will be recorded in the Warner’s Nancy Marine Studio Theatre over a period of several weeks and then streamed via YouTube and Facebook every other Friday from November to April. 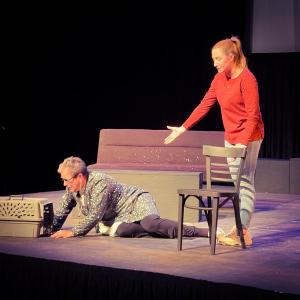 The mission of the International Playwrights Festival is to recognize the work of emerging and established playwrights and to build a link between the playwrights, the theatre community, and our audiences. The festival is a celebration of new works by playwrights from across the country and around the globe. For the ninth year, 150 plays were accepted for consideration from across the United States and as far away as China and New Zealand.

Each production will be available to view online for a period of two weeks before being taken down. There is no fee to watch but donations are always accepted. This virtual festival is made possible with a generous donation from The Marine Family.

Streaming for PUT ON A GRUMPY FACE will begin Friday, January 1, 2021, at 7:00 pm and be available online until Thursday, January 13, 2021, at 11:59 pm. The production is directed by Sharon W. Houk and features Colleen Renzullo, Erin Shaughnessy, and Spookie Carl.

ABOUT PUT ON A GRUMPY FACE by Reed Halvorson (SC)
Tabitha has experienced a meteoric rise to celebrity thanks to her cat, Tardar Sauce, the feline affectionately known as “Grumpy Cat.” When Tardar Sauce begins to act differently, she begs her newest assistant, Lisa, to save them both. This energetic play satirizes the world of fleeting celebrity synonymous with pop culture.

ABOUT REED HALVORSON: Reed has called Greenville, SC home for 15 years. He holds an MFA in Playwriting from the University of Nebraska Omaha. He is in his 5th year as the HS Theatre teacher at Christ Church Episcopal School where he teaches amazing young artists. His constant inspiration is his 14-year-old daughter, Carly.

The remaining streaming schedule for the winning playwrights:

About the Warner Theatre
Built by Warner Brothers Studios and opened in 1931 as a movie palace (1,772 seats), the Warner Theatre was described then as “Connecticut’s Most Beautiful Theatre.” Damaged extensively in a flood, the Warner was slated for demolition in the early 1980s until the non-profit Northwest Connecticut Association for the Arts (NCAA) was founded and purchased the theatre. The Warner reopened as a performing arts center in 1983, and restoration of the main lobbies and auditorium was completed in November 2002. In 2008, the new 50,000 square foot Carole and Ray Neag Performing Arts Center, which houses a 300 seat studio theatre, 200 seat restaurant, and expansive school for the arts, was completed. Today, Warner is in operation year-round with more than 160 performances and 100,000 patrons passing through its doors each season. Over 10,000 students, pre-K-adult, participate in arts education programs and classes. Together, with the support of the community, Warner has raised close to $17 million to revitalize its facilities. NCAA’s mission is to preserve the Warner Theatre as a historic landmark, enhance its reputation as a center of artistic excellence and a focal point of community involvement, and satisfy the diverse cultural needs of the region. To learn more about the Warner Theatre, visit our website: www.warnertheatre.org