The Glebe House, built about 1740, is celebrating its 93rd year in operation in 2018 as a historic house museum and garden. It was the home of Rev. John Rutgers Marshall, his wife Sarah, nine children, and three slaves from 1771 to 1786 and is furnished with period furniture including a wonderful collection of furniture made in Woodbury during the 18th century. 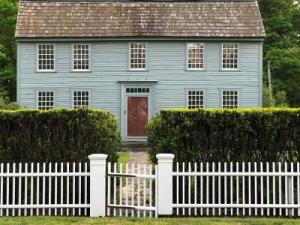 In 1771 Woodbury’s first Anglican minister, John Rutgers Marshall of New York City arrived with his wife Sarah. By the end of the Revolutionary War, John Marshall and his family had endured the oppression suffered by many New England Anglicans who were often presumed to be loyal to the king.

Only weeks after American independence was secure, a group of Connecticut Anglican clergy met secretly at the Glebe House to make a momentous decision; to take part in the building of a new nation while upholding their religious heritage. The group elected the Reverend Dr. Samuel Seabury to go to London to argue before Parliament to become the first Bishop in the new world, a decision that assumed both the separation of church and state and religious tolerance in the new nation.

After the Marshalls had moved from the Glebe House, Gideon B. Botsford, a silversmith, lived in the house. Botsford lived and worked at the Glebe House with his wife and family of eight children through the mid-19th century. By the 1920s the house had passed through several owners and fallen into great disrepair.

As plans were discussed to tear down the house, it was saved by the Seabury Society for the Preservation of the Glebe House, which repaired the building, began collecting furniture, and raised funds to ensure continued operations as a museum.

The Glebe House was restored in 1923 under the direction of Henry Watson Kent, a pioneer of early American decorative arts and founder of the American Wing at the Metropolitan Museum of Art, New York. One of the early historic house museums in the country, The Glebe House opened its doors to the public in 1925.

The Glebe House Museum will be reopening for reserved guided tours beginning Friday, August 7th. The Museum is following all current State & CDC guidelines for the health & safety of their visitors, volunteers & staff. Guided tours will be limited to the first floor of the historic Glebe House. Tour length will be limited to 15 minutes within the Museum with extra time in the Garden for Docents to answer questions or elaborate on areas of interest. Masks and social distancing protocols are required. Each tour is limited to 4 adults traveling together. Groups will not be mixed.

A limited number of tickets will be available for each time-slot. Tickets are available up to 24 hours in advance, through Eventbrite by following the link: https://www.eventbrite.com/e/glebe-house-museum-tours-tickets-114193495820?aff=ebdssbeac