On Saturday, February 22, the Institute of American Indian Studies is hosting a culturally important program on research and sharing in regard to Indigenous People called Etuaptmumk- Two-Eyed Seeing. Etuaptmumk is a Mi’kmaw saying that translates to “Two-Eyed Seeing.” This concept refers to learning how to see from one eye the strengths of Indigenous knowledge and from the other eye the strengths of Western knowledge. The idea of “Two-Eyed Seeing” has been developed by Albert Marshall, an environmental voice and culture keeper for Eskasoni First Nation in Cape Breton. 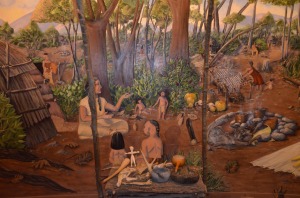 Join the IAIS Education Coordinator and Traditional Storyteller Darlene Kascak, Schaghticoke Tribal Nation along with IAIS Educator and Ecologist Susan Scherf for an interactive presentation and discussion that examines how people can include Etuaptmumk or “Two-Eyed Seeing” concept in their daily lives. This method of thought and research is a way for Native and Non-Native people to understand one another and to collaborate. Community engagement between the two groups is of paramount importance and leads to authenticity.

This fascinating program strives to share research paradigms and approaches that align with Indigenous worldviews. A trend in the academic world, that many scholars are using Marshall’s Two-Eyed Seeing as a framework to understand and use western methods and theory with indigenous knowledge. When Indigenous people become part of the research rather than those being researched, the results of this research and understanding will be transformed. Questions will be framed differently and priorities will change.

The Etuaptmumk- Two-Eyed Seeing program takes place at 1:30 p.m. on February 22 and is included in the price of admission that is $10 adults, $8 seniors, and $6 children.

Looking for winter fun? Check out the 12 participating vineyards on the Winter CT Wine Trail... this is your chance to compete for $6,000 worth of fabulous prizes... for the scoop https://westernconnecticut.blogspot.com/2023/02/ct-wine-trail-announces-2023-winter.html
With wind gusts in the 40-50mph range JumpFest in Salisbury won’t be able to safely hold their target jumping event on Friday night. Given the accompanying wind chills, we will also be canceling our Human Dogsled Race.
We are so excited...Jumpfest in Salisbury is on this weekend Feb. 3, 4, and 5 and it is looking snowy for this amazing ski jump festival where you can watch future Olympians compete! For information http://www.jumpfest.org
#ToursofDistinction, a Connecticut Tour Company is celebrating #nationalplanyourtravelday! Everything is on SALE! Save up to $200 per person
#MedicinalMonday...Twin Leaf - A President's Flower that had many interesting uses for Native American communities...check out our new blog to find out how Twin Leaf was used and which U.S. President it was named after! https://nativeamericanmuseum.blogspot.com/2023/01/medicinal-mondaytwin-leaf-presidents.html
A jewelry-making workshop at The Institute for American Indian Studies on Sunday, January 29 - just in time for Valentine's Day! For all the details check out our new blog https://westernconnecticut.blogspot.com/2023/01/jewelry-workshop-just-in-time-for.html
Join 6,649 other subscribers
Loading Comments...
%d bloggers like this: