Are you up for some quirky winter fun? Get a group of your friends together to enter JumpFest’s Human Dogsled Race! This unusual winter event is part of the 94th annual Ski Jumping Championships in Salisbury, Connecticut taking place on Friday, February 7, Saturday, February 8, and Sunday, February 9.

The human dogsled team consists of six people, five pulling, and one rider. It is so much fun to watch these colorful sleds and costumed teams race against one another! The teams compete in timed, two teamed races, and the two fastest times in the men, women, and mixed categories run a second race. Trophies are awarded to the three fastest teams in each category. There is also a people’s choice trophy for the most unusual sled and costumes.

The Human Dogsled Competition takes place on Friday, February 7 around 9 p.m. after the ski jumps for the evening are over. The registration fee is only $25 (paid on February 7 at the event) and all human dogsled participants get into Jumpfest free! For detailed information http://www.jumpfest.org. To download the registration form click here.
The registration fee helps SWSA, a non-profit volunteer organization to continue to foster the sport of ski jumping and the Eastern National Ski Jumping Championship.

Festival Schedule
JumpFest kicks off on Friday, February 7 at 6 p.m. with Target Jumping beginning at 7 p.m. Target Jumping is followed by the infamously fun Human Dog Sled Race, a crowd favorite that begins between 8:30 p.m. and 9 p.m. Teams of six participate, five pulling the sled and one riding. The sleds and costumes, of course, boggle the imagination! Trophies are awarded for the best in men’s women’s, mixed categories. Competitors navigate a .3-mile course through the snow. It’s all in fun, and teams can get very creative with both their costumes and sleds. Two large bonfires and warm food and beverages are available. 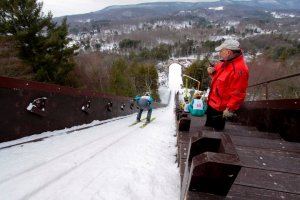 On Saturday, February 8, things warm up with a Junior Meet that is followed by the practice of participating jumpers from 11 a.m. to 12 noon. The main competition begins at 1 p.m. It is thrilling to watch these Olympians in the making defy gravity and soar through the air with runs of up to 200 feet. Another tradition is the Snow Ball Dance taking place at the White Hart Inn with entertainment by the Steve Dunn Band. This is the perfect time to mingle with fellow sports lovers, bid at the silent auction, and take a chance on a raffle ticket that benefits the Salisbury Winter Sports Associations (SWSA) programs. The admission to the Snow Ball Dance is $15. The highly anticipated Eastern U.S. Ski Jumping Championships on Sunday, February 9 begins with practice at 11 a.m.; the competition begins at 1 pm. At this event, there are often Olympic hopefuls that display the tremendous coordination, skill, and grace that have what it takes to soar so far and so high with a smooth and successful landing. Make ski jumping history and be there to see if the Salisbury record is broken – perhaps a new contender for the Olympics! Even the most sedentary spectators will appreciate the extraordinary coordination and skill required to make this jump! Judging from past history, some of the competitors here will go on to the Olympics. 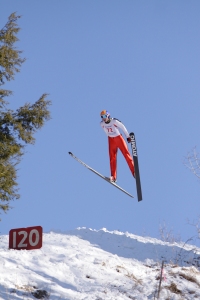 It all began in 1926 when a gentleman named John Satre (Say-tree) showed off the sport he had learned in his native Norway with the unlikely feat of jumping from the roof of a shed while wearing skis. To everyone’s surprise, instead of crashing Satre soared through the air and glided to earth. It looked like fun and by the next summer, several neighbors had gotten together to begin building a proper takeoff and ski run. A former cow pasture became the landing area. On January 29, 1927, the club, the Salisbury Winter Sports Association (SWSA) held its first competition with a crowd of more than 200 spectators. This all-volunteer group has hosted several National Championships and, today continues to maintain Satre Hill, introduces young and old to the sport of ski jumping, and organizes the competitions.

A jewelry-making workshop at The Institute for American Indian Studies on Sunday, January 29 - just in time for Valentine's Day! For all the details check out our new blog https://westernconnecticut.blogspot.com/2023/01/jewelry-workshop-just-in-time-for.html
Did you know that solo travel is on the rise? Check out our new blog to see what's hot according to #ToursofDistinction a Connecticut Tour Operator that has been in business for 51 years! https://westernconnecticut.blogspot.com/2023/01/solo-travel-growing-trend-in-2023.html
PALACE THEATER ANNUAL RAFFLE LAUNCH - CASH, GIFT CARDS & 22kt GOLD BRACELETS AMONG THE PRIZES- CHECK OUT OUR BLOG FOR THE DETAILS
From the #instituteforamericanindianstudies #MedicinalMonday- Despite its name, Winged Buckwheat is not a type of wheat. As a matter of fact, it isn't even a grain! Find out all about this plant and how Native American communities used it in our new blog https://nativeamericanmuseum.blogspot.com/2023/01/medicinal-monday-winged-buckwheat.html
One of Connecticut's most historic furniture companies, The Hitchcock Chair Company is having its grand opening on Saturday, January 21, from 10 - 4, Sunday, Sunday, January 22, from 12 - 4, and Monday, January 23 from 10 - 4. The new location is 107 John Groppo Drive, Winsted, 06098. For more info www.hitchcockchair.com
#MedicinalMonday If you happen to be out hiking in the Appalachian Mountains, you may come across a small pine tree, known as the Table Mountain Pine with amazingly spikey pine cones that look as though they might hurt if you touch them the wrong way. Table Mountain Pine trees have a fairly small range and Native American communities found both medicinal and practical uses for this small, and sometimes an irregularly shaped tree.https://nativeamericanmuseum.blogspot.com/
Join 6,650 other subscribers
Loading Comments...
%d bloggers like this: