Three days of fun, food, and dazzling free entertainment on multiple stages, plus a myriad of special events for families and friends, from nine to ninety marks just some of the activities planned for the 2019 Norwalk Oyster Festival hosted by the Seaport Association on Friday, September 6, Saturday, September 7, and Sunday, September 8, 2019 at the 35-acre Veterans Memorial Park in Norwalk. “Our 42nd annual festival is packed with value added extras especially when you consider that all the entertainment including the headliners Mike DelGuidice & Big Shot, and Brian Howe, former lead singer of Bad Company are included in the ticket price,” said Mike Reilly, President of the Norwalk Oyster Festival. “This season has been one of our best with the addition of a free-standing timber pavilion on Sheffield Island that will host parties and events for years to come. Our mission has always been to preserve and share our maritime heritage, to help with the environment of Long Island Sound, and to have children experience our 151 year-old Lighthouse and Gate Keepers Cottage and, this festival helps us do just that,” adds Reilly. For tickets click here https://www.seaport.org.

Headliner of Oyster Festival, Sept. 7 – Mike DelGuidice & Big Shot @ 8:30 pm
The late summer tradition of the Norwalk Oyster Festival is one of Connecticut’s most iconic festivals which is why Mike DelGuidice, a multi-instrumentalist, and vocalist touring internationally with Billy Joel is taking a night off from his touring schedule to perform with his band, Big Shot on Sept. 7 at 8:30 pm. In addition to producing two of his own albums, one of DelGuidice’s original songs, “Ordinary Guy” was the theme song for actor/comedian Kevin James sitcom, “Kevin Can Wait.” Kevin James also stars in DelGuidice’s new music video featuring his new original song, Mona Lisa, https://youtu.be/TvOZNVW_nsc.

DelGuidice has spent the last 18 years building and perfecting his encyclopedic knowledge of Joel’s musical catalogue. After Billy Joel heard Mike sing, he hired him, literally on the spot to be in his band. Mike is probably one of the few artists around where the front guy of the band is actually in the band of the artist his band covers. DelGuidice’s band, Big Shot includes other current long-time members of Billy Joel’s touring band including guitarist Tommy Byrnes and drummer Chuck Burgi, along with John Scarpulla, Carmine Giglio, and Nick Dimichino, who also have impressive resumes. 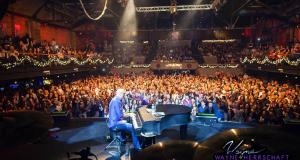 DelGuidice and Big Shot packs hit after chart-topping hit in an amazingly high-energy show that leaves audiences wanting more. “We are thrilled that DelGuidice is taking a night off from touring with Billy Joel and performing at this years’ Oyster Festival. DelGuidice stature as a well -known worldwide performer makes his band highly sought after because they are such crowd-pleasers. After all, DelGuidice was handpicked by Billy Joel himself and hired, and on Saturday night he will be rocking the Oyster Fest. We would also, once again, like to acknowledge that First County Bank is our presenting sponsor for the ninth year in a row.” says Mike Reilly, President of the Norwalk Oyster Festival.

Main Stage Performance – Sept. 7 @ 7:30 p.m.
To get Saturday night rocking, Alex Shillo takes the stage at 7:30 p.m. with his eclectic brand of rock and country music with a nod to his hero, Bruce Springsteen. Growing up in a musical household has its advantages. One super advantage is that Shillo grew up in a home with a recording studio where a variety of musicians had sessions. Needless to say, Shillo has been enthralled by music since a very early age and his performances show a depth of style and experience well beyond his years. Shillo finds inspiration in his father and is following in his footsteps. Shillo’s dad was the founder/lead singer/songwriter of the late 70s and 80s band SILVERADO that had songs on the Billboard charts. Recently Shillo released his first CD, “Had It All, ” that shows his sound is matched by his excellent songwriting skills. 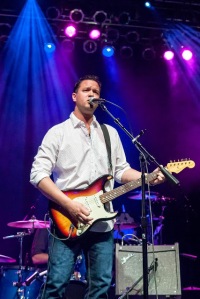 Main Stage Performances Sept. 6, 7 and 8
Music on the Main Stage is scheduled for all three days and features a variety of crowd pleasing musical entertainment. “The Oyster Festival is the last big thing that takes place before the end of the summer. This is the perfect time for folks to come to the Festival and say goodbye to the summer of 2019; and to help us celebrate 151 years of the Sheffield Island Lighthouse,” says Mike Reilly, President of the Norwalk Oyster Festival.

Main Stage – Sacred Fire – Sept. 6 @ 8:30 p.m.
You are in for a treat if you like Latin music, because the headliner act, Sacred Fire is taking the Main Stage on Sept. 6 @ 8:30 p.m. They are a fantastic tribute band to Santana with an amazing repertoire. The robust energy of this band’s live performances makes Sacred Fire a band to be reckoned with! Sacred Fire is blistering six-piece Latin rock band considered by many to be one of the hottest, hippest live shows that perform the songs spanning the entire 50-year career of Carlos Santana. Sacred Fire brings a sound that sizzles with guitar, organ, percussion, and vocals. 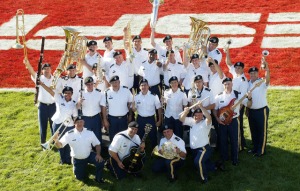 Main Stage – Ripchord – September 7 @ 2 p.m.
Saturday afternoon kicks off with a Connecticut favorite, Ripchord, the Official Band of the Connecticut National Guard. The 102 Army Band plays a variety of music from classical and jazz to rock and patriotic; sure to please listeners of all ages. As goodwill Ambassadors of Connecticut and the nation, they perform at concerts, ceremonies, and parades all over the U.S. and around the world. 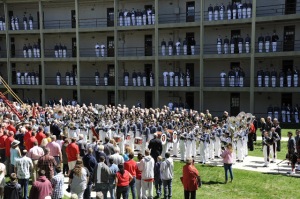 Main Stage – Virginia Military Institute Commanders – Sept. 8 @ 1 p.m.
Get ready to swing into Sunday afternoon at 1 p.m. with the Commanders that will perform music from the Big Band Era and beyond. Listening to the music of Benny Goodman, Tommy Dorsey, Duke Ellington, and Glen Miller you will be doing the Lindy Hop, (named after Charles Lindberg’s Trans-Atlantic flight) before you know it! The VMI Commanders have a long and distinguished history. They were first formed in 1917 as the Ramblin Keydets and have provided music for dances and social events since that time. The big band, is styled after Glenn Miller’s Band from the 1940s swing era and consists of 17 cadets at the “I” and a vocalist. Today this band travels all over the world performing at a variety of venues. The cadets in the band are from all majors and branches of the Military ROTC Department at the Virginia Military Institute.

Great ready to escape to “Margaritaville” at the Oyster Festival on Sunday, September 8, beginning at 2 p.m. when the ultimate beach party tribute band, Jimmy Kenny and the Pirate Beach Band plugs in and lights up the stage…after all, it is almost 5 o’clock somewhere! The goodtime vibe of the Jimmy Kenny Band will put you in an endless summer state of mind. So put on your best “Parrothead” gear – your favorite Hawaiian shirt, straw hat, and flip-flops, grab some food and drinks from one of our nearby vendors and get ready to sing and dance along to some of the best of Jimmy Buffett, Kenny Chesney and the Zac Brown Band plus a variety of country favorites, summer pop, reggae and tropical classics. 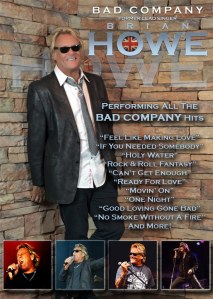 Main Stage – Bad Company former Lead Singer – Brian Howe @ 5 p.m.
Brian Howe, former Lead Singer of Bad Company will close out the 42nd Norwalk Oyster Festival with style, exuberance, and a blast from the past of some of our favorite songs ever. Howe has one of rock’s most legendary voices and as he croons hit after hit he will have you dancing as the sun goes down. Howe fronted Bad Company between 1986 and 1994 and provided hit vocals on hit albums including Dangerous Age (1988) and Holy Water (1990). Today he is performing all the Bad Company hits like “Feel Like Makin Love,” “Good Lovin’ Gone Bad,” “Can’t Get Enough,” and other hits. Howe has pursued his solo career with passion and enthusiasm, and he always ignites and entertains the crowds that he performs for.

Multiple Stage Performances Sept. 6,7,8
In addition to Main Stage performances, the 2019 Oyster Festival features dozens of local and regional acts on multiples stages. For a complete list of multiple stage performers check out our website https://seaport.org/Entertainment.

About the Oyster Festival
Proceeds go to The Norwalk Seaport Association (a not-for-profit 501 C3 organization) that is wholly responsible for organizing and financing the annual Oyster Festival. Funds raised from the Oyster Festival allow the Seaport Association to continue its educational programs, stewardship for the 1868 Sheffield Island Lighthouse, Norwalk Islands, habitat restoration projects with the U.S. Fish & Wildlife Service, and other services. The First County Bank has been a presenting sponsor for eight years.