The Institute of American Indian Studies in Washington has a perfectly unique way to top off Valentine’s Day week. On Saturday, February 16 from 1:30 p.m. – 3:30 p.m., Ojibway artist, and musician Allan Madahbee will explain the cultural significance and the hauntingly beautiful sound of the Native American courting flute. The flute is deeply rooted in the traditions of Eastern Woodland indigenous peoples.

Today, makers of Native American Flutes like Ojibway artist and musician AllanMadahbee craft their personal style and sound into their creations. Madahbee began to research the Chippewa flute culture and was influenced and mentored by Joseph Firecrow of the Cheyenne Nation. “We became friends and he provided guidance and feedback and explained some of his methods of flute making. With his passing last year, we have all lost a great Native American flute maker and musician. I am proud to continue our flute making traditions.” The sound of the courting flute that is usually made of cedar has an uncommon scale for Western music and is entrancing.

Born on the shores of Lake Huron, Allan Madahbee is a member of the Ojibway (Chippewa) Nation that has pursued the traditional arts and crafts of his ancestors. He has been making Native American flutes for about ten years. “I had always thought they were a product of the Southwest Indian tribes, but a book that I found that was written during the 1800s about Chippewa culture, had a passage about the Chippewa flutes, along with pictures. This made me realize that they were indeed a part of my Chippewa culture. Knowing that my ancestors constructed these flutes for hundreds of years has inspired me to continue this tradition. Also, the haunting sound from these mystical instruments is a large part of my inspiration.” 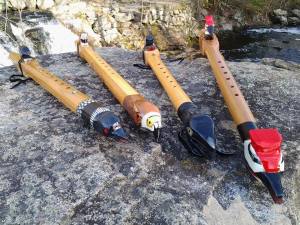 Along with constructing Woodland flutes, beaded moccasins, woodcarvings, Native American regalia, and rock sculptures, Madahbee always returns to his artistic roots in paintings. Mainly self-taught, Madahbee attended school with fellow Ojibway artists Blake Debassige and James Simon – two well known Anishnawbe artists that are respected and have their paintings displayed around the world.
Space is limited and reservations are suggested. To make sure you get a spot call the Institute for American IndianStudies at (860) 868-0518 or email general@iaismuseum.org to reserve your spot. The program is included in the price of admission: $10 adults; $8 seniors; $6 children; IAIS Members free.

About The Institute for American Indian Studies

Located on 15 woodland acres the IAIS has an outdoor Three Sisters and Healing Plants Gardens as well as a replicated 16th c. Algonkian Village. Inside the museum, authentic artifacts are displayed in permanent, semi-permanent and temporary exhibits from prehistory to the present that allows visitors a walk through time.

The Institute for American Indian Studies is located on 38 Curtis Road in Washington Connecticut and can be reached online or by calling 860-868-0518.