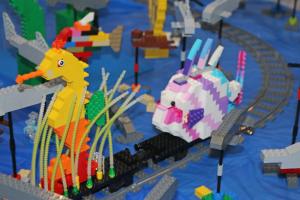 LEGO experts from Play-Well TEKnologies will be on hand both days to oversee a big fun coral-reef scene made entirely out of LEGO blocks in Newman’s Own Hall (near the seals).

The experts will create an underwater environment, but it needs animals! Aquarium guests can build a small LEGO marine creature that will be part of the finished piece. Choose from such creatures as a jellyfish, seal, shark, sting ray, turtle and fish, or build an animal unknown to science from your imagination.

“If you’ve been to The Maritime Aquarium lately, you’ve had the chance to create a two-dimensional marine animal in the clever ‘Sketch & Release’ activity on our giant video wall,” said Aquarium spokesman Dave Sigworth. “ ‘LEGO Weekend’ adds a dimension – literally – by letting you use your creativity to assemble three-dimensional creatures.”

Also during “LEGO Weekend,” Aquarium guests can build motorized LEGO machines that will duel for superiority on LEGO Battletracks.

The fun runs from 10 a.m. to 5 p.m. both days, but Maritime Aquarium members can get to the LEGO tables first each morning beginning at 9 a.m. (with proof of membership).

Learn more about “LEGO Weekend” and other events and programs at the popular South Norwalk family attraction this winter at www.maritimeaquarium.org.

OPENING DAY! Friday, May 20, 2022, from 3:00 to 6:00 PM at our new location! The Kent Chamber of Commerce and the Kent Land Trust are excited to announce that the Kent CT Farmers Market is moving! The market will now be held at the Kent Land Trust field on Rt. 7, across from the Kent Greenhouse. The new location offers lots of parking with easy access to the market, room for numerous and diverse vendors, and plenty of space to relax and enjoy the scenery! Click link below for more details!
On Saturday, May 21 from 1 p.m. to 4 p.m. head to Weir Farm, National Historic Park for the National Park Trust’s Kids to Parks Day of celebration to encourage kids and families to visit the local, state, and national parks -- There will be a art programs on bears and much more. Check out our new blog for information. All is free and open to the public https://www.nps.gov/wefa/index.htm
Looking for a great way to kick off June? Docktails and Oyster is back on June 4 @ Norm Bloom & Son Oyster Farm in Norwalk! Join the Norwalk Seaport Association at our luau-themed fundraiser and eat your fill of oysters literally fresh off the boat! There will also be passed and tabled appetizers like House Smoked Pork Sliders Topped with Slaw & Chopped Pineapple, Black Bean & Corn Salad w/Cilantro & Lime, Citrus Grilled Shrimp with Heirloom Tomato Salad, soft drinks, beer and wine, and a signature cocktail! Tickets are on sale now online @ HTTP://www.seaport.org.
#TraveltipTuesday...It seems we have gone from winter right into summer. TOD offers many getaways that include time on the beach! Check out our must have beach packing tips.todct.us/whattopackforthebeach
Join The Maritime Aquarium @ Norwalk Tuesday, June 14 for this special after-hours event – hosted by Science Friday's Ira Flatow – in celebration of Cephalopod Week! They will begin the evening by enjoying appetizers and drinks during a meet-and-greet, followed by a screening of short science documentaries (plus, a new 4D film "Octopus: Blue Planet II 4D Experience!") and an interview hosted by Ira with two very special squid-y guests. For tickets https://www.maritimeaquarium.org/sciencefriday
Still time to purchase tickets for the Litchfield Historical Society's Garden Tour of historic North Street. for the scoop check out our new blog https://westernconnecticut.blogspot.com/2022/05/litchfield-garden-tour.html
Loading Comments...
%d bloggers like this: