End the year – including a countdown to 12 o’clock noon – with special family fun on Mon., Dec. 31 at The Maritime Aquarium at Norwalk. The Aquarium is planning fun midday activities for families with young children who want to celebrate the end of 2018 together, but not at the stroke of midnight.  From 11 a.m. to 2 p.m., a disc jockey will provide the beat, as well as a countdown to 12 o’clock; 12 o’clock noon, that is.  “ ‘Noon Year’s Eve’ gives parents the chance to count down to a celebration with their children, but without the kids needing to stay up way past their bedtimes to do so,” said Aquarium spokesman Dave Sigworth. 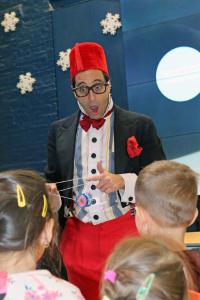 Special guests on Dec. 31 include:

“bubble-ologist” Kim Winslow
Winslow developed his skills with bubbles as a member of the Big Apple Circus Clown Care Unit, which entertains patients in hospitals in New York and around the world. Simple soap and water become delicate kinetic sculptures that spin, glide, bounce and move in ways that will delight.

strolling family comedy and juggling by Peter Straus
Straus has toured America as a clown with Ringling Bros. and Barnum & Bailey Circus and worked extensively with the Big Apple Circus. He also has had numerous appearances on TV, including several spots on “The Late Show with David Letterman,” and has been a featured comedian and fire juggler at New York’s Metropolitan Opera.

Get more details about all exhibits, programs, IMAX movies and special events at http://www.maritimeaquarium.org.