– Connecticut’s Beardsley Zoo is pleased to announce the newest addition to the Zoo family, a three-year-old male Red wolf named Peanut. After arriving on July 18, 2018 from the Wolf Conservation Center in South Salem, New York, the last several weeks have been devoted to making him familiar with his new home. Verified to be in excellent physical condition by the Zoo’s on-site veterinarian, Peanut has joined the Zoo’s existing female Red wolf, Shy, in the Red wolf habitat. Guests will be able to view Peanut and Shy between 9:00 a.m. and 4:00 p.m. daily from the W.O.L.F. Cabin (Wolf Observation Learning Facility). 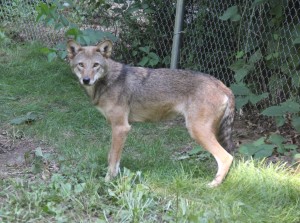 Born on May 2, 2015, Peanut’s transfer is part of the Red Wolf Species Survival Plan (SSP).
Red wolves are facing extinction in the wild for a second time. Thirty years after the Federal Government reintroduced Red wolves to the 150,000 acre Alligator River National Wildlife Refuge in North Carolina, a mix of swamp and forest, the only distinctly American wolf is losing its fight for survival. U.S. Fish and Wildlife Service biologists introduced more than 100 captive-bred wolves into the refuge and saw the population peak at more than 225 wolves a decade ago. Their numbers have plummeted today to fewer than 40. Wolves have been shot by homeowners and farmers, hit by cars, and removed for doing what comes naturally to wolves: roaming to find new territory.

Seeing a red wolf in the wild today is one of the rarest sights in nature. The Species Survival Plan for the endangered Red wolf has played a critical role in preserving this imperiled species through carefully managed breeding. It is hoped that Peanut and Shy will breed to ensure the long-term sustainability of Red wolves in human care. The future of Red wolves in the wild remains unknown. U.S. Fish and Wildlife Service opened a second public comment period for its final decision on removing management efforts from private lands, a move that scientists and Red wolf biologists fear will mean the end of the species in the wild. 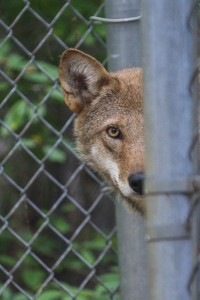 “Peanut is a beautiful Red wolf, and an important ambassador for his critically endangered species,” explained Gregg Dancho, zoo director. “Welcoming Peanut to the Zoo at this time gives us a platform for alerting our guests to the fragile state of Red wolves in the wild. They have a very uncertain future, except in SSP programs in Zoos.”

“The Zoo’s SSP/breeding program exists to bolster the dwindling number of animals still in the wild,” explained Dancho. “It’s a real testament to our Zoo’s strong reputation for working to protect endangered species and to educate our guests about them. It’s an important part of our mission.”