The Amistad is a replica of a Spanish Schooner and is Connecticut’s official flagship and Tall Ship Ambassador. Each summer this vessel becomes a floating classroom, the crew consists of about eight high school students who remain on the ship for about two weeks along with the Captain. In addition to getting a firsthand lesson in American History, the students come away with many teambuilding experiences that are learned when sailing this massive ship.​ 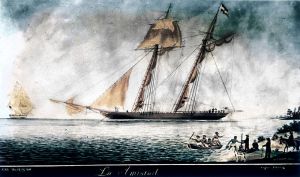 ​The Amistad will be mooring off of Sheffield Island in Norwalk on July 26 and August 14 that will give visitors cruising to Sheffield Island on these days a special look at this 136 ton, 129-foot schooner.​
History of the Amistad

The Amistad was made famous by a slave revolt made by Mende captives in 1839. The captives were illegally purchased African slaves being transported from Cuba aboard the Spanish built Amistad. The mutiny was successful and the African captives seized the ship, killing two members of the crew and ordered the survivors to sail the ship to Africa.

The surviving crew, however, steered the Amistad north where it was intercepted by an American brig off the coast of Long Island, and the crew and slaves were taken to Connecticut where they were interned. The two Spaniards that enslaved the Africans were freed by the Americans, and the slaves were imprisoned.
At a hearing in Hartford, a federal court judge ruled that the Africans were not liable for their actions because they were enslaved illegally. The case proceeded to the Supreme Court where former President, John Quincy Adams defended the Africans, arguing they should be granted their freedom. The Court agreed because international slave trade was illegal and, further, that people escaping should be recognized as free under American Law.

About the Sheffield Island Ferry Cruise and Tickets 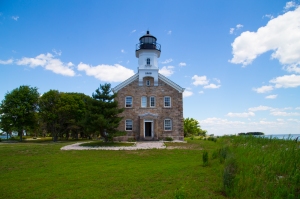 To get a unique and close up view of this historic ship on July 26 and August 14, book your tickets on the Sheffield Island Ferry. On this cruise you will tour the island, the lighthouse and the captain will cruise around the Amistad Vessel for close up and unique views. On August 14, the Ferry departs the dock at 11 a.m. and 3 p.m. Be sure to arrive about 30 minutes prior to boarding to snag the best seat and to facilitate boarding. For tickets click here https://seaport.org/TICKETS.​

Have you ever wanted to learn how to make a Native American basket? The Institute for American Indian Studies is hosting a basket making workshop on June 5, 2022. Check out our new blog for all the details and how to sign up https://westernconnecticut.blogspot.com/2022/05/june-5-traditional-native-american-bark.html
From the Institute for American Indian Studies #MedicinalMonday... there is something about the yellow-spined thistle that resembles the delicacy of a snowflake. The look of this plant attracted the attention of Native Americans living in the Southwestern portion of America and they found many medicinal uses for it. Check out our new blog for all the information! https://nativeamericanmuseum.blogspot.com/2022/05/medicinal-mondayyellow-spined-thistle.html Special thanks to Eugene Sturla, for the use of this image.
OPENING DAY! Friday, May 20, 2022, from 3:00 to 6:00 PM at our new location! The Kent Chamber of Commerce and the Kent Land Trust are excited to announce that the Kent CT Farmers Market is moving! The market will now be held at the Kent Land Trust field on Rt. 7, across from the Kent Greenhouse. The new location offers lots of parking with easy access to the market, room for numerous and diverse vendors, and plenty of space to relax and enjoy the scenery! Click link below for more details!
On Saturday, May 21 from 1 p.m. to 4 p.m. head to Weir Farm, National Historic Park for the National Park Trust’s Kids to Parks Day of celebration to encourage kids and families to visit the local, state, and national parks -- There will be a art programs on bears and much more. Check out our new blog for information. All is free and open to the public https://www.nps.gov/wefa/index.htm
Looking for a great way to kick off June? Docktails and Oyster is back on June 4 @ Norm Bloom & Son Oyster Farm in Norwalk! Join the Norwalk Seaport Association at our luau-themed fundraiser and eat your fill of oysters literally fresh off the boat! There will also be passed and tabled appetizers like House Smoked Pork Sliders Topped with Slaw & Chopped Pineapple, Black Bean & Corn Salad w/Cilantro & Lime, Citrus Grilled Shrimp with Heirloom Tomato Salad, soft drinks, beer and wine, and a signature cocktail! Tickets are on sale now online @ HTTP://www.seaport.org.
#TraveltipTuesday...It seems we have gone from winter right into summer. TOD offers many getaways that include time on the beach! Check out our must have beach packing tips.todct.us/whattopackforthebeach
Loading Comments...
%d bloggers like this: