Have you ever wondered how Native Americans survived in the wilderness without any modern tools? If you have, then make sure to attend the flintknapping workshop at the Institute for American Indian Studies on 38 Curtis Road in Washington with Jeff Kalin, a primitive technologist on Saturday, April 28 and Sunday, April 29 from 12 noon to 3 p.m.

About Flintknapping
Flintknapping is the age-old traditional way that Native Americans created sharp-edged tools and weapons from stone. The use of implements made from flint was widely practiced in New England because their survival depended on a material, like flint that could be used to produce sharp tools.

The first step in the flint knapping process is to quarry large pieces of chert or flint. The use of flint to make weapons and tools has been used by humans for at least two million years. The composition of flint when fractured causes it to break into sharp-edged pieces. Native Americans recognized this property of flint and learned how to fashion it into knife blades, spear points, arrowheads, scrapers, axes, drills and other sharp implements using a method known as flintknapping. If these tools were broken or damaged while being used they were sometimes reshaped into smaller tools that could be used in a similar way.

After finding a piece of flint it is hit with a hammerstone to break off a flake to make a tool or weapon. This tool is then roughed out and the general shape is made, this shape is referred to as a preform. The next step entails a striking tool made of an antler, bone or stone that is used to shape the stone into a weapon or tool. This is followed by pressure flaking by pressing an antler or stone end to the edges to sharpen the piece. The implement can be sharpened even more by striking the edge in a downward motion, the thinner the flint, the sharper the tool or weapon. 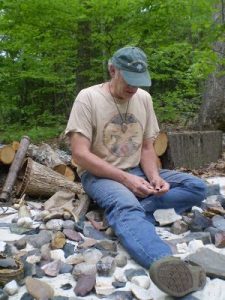 At this workshop, on April 28 and April 29 participants will discover the fascinating history of Native American flintknapping from primitive technologist expert, Jeff Kalin, of Cherokee ancestry. During the workshop, Kalin will explain the historic importance of flintknapping and how it was critical to the well being of the tribe as the implements produced touched every aspect of daily life by providing implements to use in hunting, fishing, making clothes, canoes, and structures.

Participants will learn percussion and flaking techniques from Kalin that will turn an ordinary piece of flint into a useful tool. This workshop is best for adults and children 15 and older. Call the Institute at 860-868-0518 or email media@iaismuseum.org to reserve your spot because this popular workshop is expected to sell out.

Jeff Kalin has more than 25 years of experience in the field of primitive technologies and is a consultant to museum curators and archaeologists in the analysis of artifacts. He is a recognized expert in Clovis point replication and other types of stone tools.

He has constructed prehistoric sets and props for filmmakers and his pottery, handcrafted from river clay is in many public and private collections. Kalin has built nearly 200 aboriginal structures, either free-standing or congregated in villages.

The Institute for American Indian Studies

Located on 15 woodland acres the IAIS has an outdoor Three Sisters and Healing Plants Gardens as well as a replicated 16th c. Algonkian Village. Inside the museum, authentic artifacts are displayed in permanent, semi-permanent and temporary exhibits from prehistory to the present that allows visitors a walk through time. The Institute for American Indian Studies is located on 38 Curtis Road in Washington Connecticut and can be reached online or by calling 860-868-0518.

#WigwamEscape in the news #saracody #WTNH has a recommended #weekendfun https://www.wtnh.com/on-air/8-things-to-do/8-things-to-do-this-weekend-go-fish-car-scavenger-hunt-bacon-brothers-concert/?utm_source=t.co&utm_medium=referral&utm_campaign=socialflow
Check out our new blog - the #TorringtonHistoricalSociety is open for in-person visits https://westernconnecticut.blogspot.com/2021/04/torrington-historical-society-opens.html
Flanders Nature Center & Land Trust in Woodbury, the "antique capital of Connecticut" has just announced a field and forest 5K run! For details check out our new blog! https://westernconnecticut.blogspot.com/2021/04/field-and-forest-5k-run-flanders-nature.html
#HopkinsInn on beautiful #LakeWaramaug in New Preston is now open for the season. Call 860-868-7295 or email info@thehopkinsinn.com for reservations or check out https://www.thehopkinsinn.com
Save the date for a Foraging Forum at the #instituteforamericanindianstudies on April 18 check out our new blog for all the details! https://janetserra.com/2021/04/08/the-art-of-spring-foraging-in-the-eastern-woodlands-april-18/
Visit the Connecticut Wine Trail to pick up your favorite bottle (or case!) of vino to celebrate Easter! https://ctwine.com/wineries As a reminder, while tastings are not allowed at this time, indoor seating is now available at half capacity — tables will be distanced six feet apart with no more than 10 people sitting together. Remember to bring and wear your mask! There are also a number of curbside pickup and online ordering options.
Loading Comments...
Comment
×
<span>%d</span> bloggers like this: