The variety of approaches that government agencies used to encourage widespread participation in the war effort was impressive, from the allure of artist Howard Chandler Christy’s young woman who, in a 1917 poster, seductively proclaimed, “I Want You for the Navy,” to the inquisitional tone of a war loan poster of the next year: “Are you 100% American? Prove it! Buy U.S. Government Bonds.” 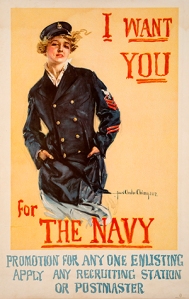 Other posters combine image and text in ingenious, surprising, and sometimes disturbing combinations. In one of the iconic wartime posters from 1918, artist Joseph Pennell powerfully imagined a partially destroyed Statute of Liberty and New York City aflame in the background, with the plea, “That Liberty Shall Not Perish from the Earth / Buy Liberty Bonds / Fourth Liberty Loan.”

“This show represents a hallmark of the Bruce — to develop creative ways to showcase our collection in meaningful exhibitions that link artistic works with human history on a global and local scale,” says Kirsten Reinhardt, museum registrar. “These posters were displayed all over the country, including in Greenwich, and the power of their message remains strong today.”

Once hailed as “the War to End All Wars,” World War I was one of the largest and deadliest conflicts in human history. Over 70 million personnel were mobilized, and more than 9 million military combatants and 7 million civilians died during the four and a half years of conflict, much of it spent in the grueling stalemate of trench warfare.

After long pursuing a policy of non-intervention, the United States entered the war on April 6, 1917. Responding to patriotic appeals and passage of the Selective Service Act, four million Americans served in uniform during the Great War, including, for the first time, thousands of women. In all, 116,516 U.S. soldiers gave their lives in combat, and an additional 200,000 were wounded, a casualty rate far greater than in World War II. According to “Greenwich, An Illustrated History,” 30 young men from Greenwich were either killed in action or died from their wounds.

Patriotic Persuasion: American Posters of the First World War is organized by Elizabeth D. Smith, Zvi Grunberg Resident Fellow 2017-18, in consultation with Ken Silver, Adjunct Curator at the Bruce Museum and author of Esprit de Corps: The Art of the Parisian Avant-garde and the First World War, 1914-1925. The exhibition is generously supported by The Charles M. and Deborah G. Royce Exhibition Fund, with support from the Connecticut Office of the Arts.

Film: The Great War, March 21 & 28
Drawing on unpublished diaries, memoirs and letters, the PBS documentary The Great War tells the story of World War I through the voices of nurses, journalists, aviators and the American troops who came to be known as “doughboys.” The two-part series explores the experiences of African-American and Latino soldiers, suffragists, Native American “code talkers,” and others whose participation in the war to “make the world safe for democracy” has been largely forgotten. It is a story of heroism and sacrifice that would ultimately claim 15 million lives and profoundly change the world forever.
March 21, 10:30 – 11:30 am. The Great War: Part I (2018) PBS (60 minutes)
March 28, 10:30 – 11:30 am. The Great War: Part II (2018) PBS (60 minutes)
Advance reservations required at brucemuseum.org/site/events: Free for Bruce members, $10 for non-members (includes Museum admission).

Monday, April 16, 10:00 – 11:00 am. Monday Morning Lecture. “America Calls”: Mobilizing Artists during the Great War” by Robin Jaffee Frank, Ph.D. Before, during, and after World War I, American artists of all generations, aesthetic styles, regions, and political points of view developed imagery to express ideas about the imperiled world in which they lived. When the United States finally entered the ongoing conflict—marking the first time American troops were sent overseas to defend foreign soil—President Woodrow Wilson mobilized artists to design posters to support the war effort. This lecture will explore seductive and persuasive propaganda in the context of the larger response of artists (including painters and sculptors) to the “war to end all wars.”

Robin Jaffee Frank has organized exhibitions, lectured, and published widely on American visual culture from the colonial through contemporary periods. She organized World War I Beyond the Trenches at the New-York Historical Society in 2017. From 2011 to 2016, Robin was Chief Curator of the Wadsworth Atheneum Museum of Art in Hartford, where she oversaw an encyclopedic collection of 50,000 objects, and led the curatorial team through the museum’s major renovation and reinstallation. Prior to working at the Wadsworth, Robin was a curator at the Yale University Art Gallery. Advance reservations required at brucemuseum.org/site/events: Free for Bruce members, $10 for non-members (includes Museum admission).

About the Bruce Museum

The Bruce Museum is located in a park setting just off I-95, exit 3, at 1 Museum Drive in Greenwich, Connecticut. The Museum is also a 5-minute walk from the Metro-North Greenwich Station. The Museum is open Tuesday through Sunday from 10 am to 5 pm; closed Mondays and major holidays. Admission is $10 for adults, $8 for seniors and students with ID, and free for members and children less than five years. Individual admission is free on Tuesday. Free on-site parking is available and the Museum is accessible to individuals with disabilities. For additional information, call the Bruce Museum at (203) 869-0376 or visit the website at brucemuseum.org.