It’s a sweet New England tradition—toasting old man winter out the door with delicious new maple syrup. As soon as days are above freezing and the sap begins to run, the annual spring ritual begins. Turning thin sap into thick, fragrant syrup is a fascinating process and Western Connecticut, where sugar maple trees abound, is one of the best places to see it in action. More than a dozen sugar houses in Fairfield County and the Litchfield Hills invite visitors to see how it is done, from tapping the maple trees to collecting the sap to boiling down the thin watery sap until it turns to the thick, fragrant syrup. 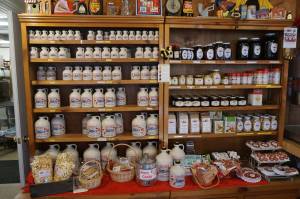 A variety of settings, from farms and nature centers to museums are among the maple possibilities, most offering tastes as well as show and tell, and many have take-home syrup for purchase as a sweet souvenir. The sugaring season starts early at large facilities like Lamothe’s Sugar House in Burlington, where the public is invited to see how syrup is made every weekend through March 30. This family-owned operation began as a hobby with seven taps and has grown to over 4500 taps and a year-round showroom. The showroom is open Mon. – Thurs. 10 a.m. to 6 p.m., and Fri. and Sat. 10 am – 5 pm and Sun. 12 noon to 5 pm. 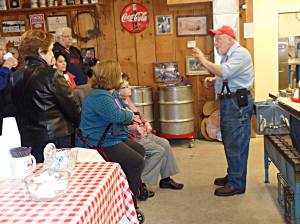 Their newly expanded shop offers a tempting array of unusual foods like maple mustard and maple apple butter plus original maple-themed items from embroidered aprons, decorating sets, and cupcake-shaped rubber spatulas to a cupcake carrier in the shape of a big cupcake. www.Lamothesugarhouse.com 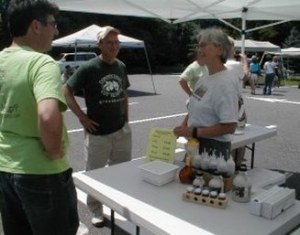 Brookside Farm II, located in Litchfield CT, is a relatively small and very high-quality maple syrup operation. Mark Harran and Kay Carroll, owners of the farm since 1999, make about 250 gallons of maple syrup per year, depending on weather conditions, which dictate the flow and sugar content of the sap. The owners both had careers in the food industry prior to buying the farm. They have applied all their collective knowledge and experience, along with Mark’s childhood experiences on his family’s large sugar bush in upstate New York, to their operation in Connecticut.

Brookside Farm’s production process yields 100% pure and basically 100% organic maple syrup. Unlike some older sugaring operations, they do not use equipment that contains lead, solder or galvanized metal. Most of the sap is collected with tubing and processed in an evaporator and canning equipment that are 100% stainless steel with tig welds.

Mark and Kay welcome visitors, just call ahead. They like teaching folks of all ages where maple syrup comes from, how it is made and the differences in the four grades of maple syrup. A tour includes a tasting and recipe suggestions. Phone: 860-567-3890.

#MedicinalMonday... Juneberry - this showy shrub that can be found in Connecticut has berries that look a bit like blueberries and have been used by Native Americans medicinally for centuries. Check out our new blog to find out how this berry is used. https://nativeamericanmuseum.blogspot.com/2022/09/medicinal-monday-juneberry.html
#MedicinalMonday Beautiful and fragrant... the Black Birch tree, originally the only source of wintergreen and much more...check out our new blog on how this tree was used medicinally by Native Americans https://nativeamericanmuseum.blogspot.com/2022/09/medicinal-monday-beautiful-and-fragrant.html
Just released the full schedule for the #NorwalkOysterFestival the biggest fundraiser for #SheffieldIslandLighthouse September 9, 10, 11 - see you there for the last great event of the summer
The #NorwalkOysterFestival is around the corner taking place on September 9,10 and 11 @ Veterans Park in Norwalk,Connecticut. Food, boat cruises of Norwalk Harbor, a Circus, entertainment and arts and crafts. For informaiton https://westernconnecticut.blogspot.com/2022/08/the-44th-norwalk-oyster-festival-fri.html
Close out summer 2022 at Lake Compounce this Labor Day Weekend! Enjoy the final weekend of Crocodile Cove Water Park when you grab a 4 pack of tickets and save up to $100 when you buy online now. https://www.lakecompounce.com/ Tickets valid any 1 operating day through September 25, 2022
#MedicinalMonday - from #instituteforamericanindianstudies the wonders of watercress...check out our new blog on how Native Americans used this aquatic plant.https://nativeamericanmuseum.blogspot.com/2022/08/medicinal-monday-wonderful-watercress.html
Join 4,229 other followers
Loading Comments...
%d bloggers like this: