On Saturday, December 16 at 2 p.m. the Sharon Historical Society hosts scholar William Hosley in his debut lecture on the history of chairs. This picture show and lecture will delve into chairs as one of the oldest most universal elements of household furnishing in human history. 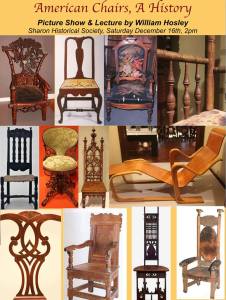 The history of chairs actually started in ancient Egypt with chairs made of ebony and ivory,they were often carved and the wood was gilded and supported upon representations of the legs of beasts or the figures of captives. Egyptians believed that the chairs need to represent natural forms to avoid creating chaos in the universe, by creating an artificial object. Fast forwarding through time, the oldest dated example of American furniture is a chair. Chairs have use. They have artistic expression. They reflect evolving technology and, especially in the pre-industrial era, they mark the places they come from stylistically, especially here in Connecticut.

Chairs from Norwich or Wethersfield or Woodbury are as distinctive as a thumb print. Chairs were also abundant enough that we have plenty of evidence – thousands of chair – to show the scope and scale of change from the earliest years of settlement to today. This program will provide a fast-paced overview of 350 years of chairs and chair-making in America.