The Aldrich Contemporary Art Museum is presenting Tony Matelli: Figure, a monumental sculpture, as part of the Main Street Sculpture series, which offers an opportunity for artists to create site-specific work for The Aldrich’s most public site, the front lawn through October 22, 2017. 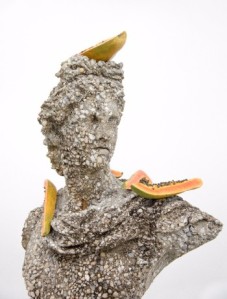 Matelli will debut his singular, larger-than-life-size outdoor figurative sculpture on May 6, 2017. This work is part of Matelli’s Garden Sculptures series, initiated in 2015, in which he defaces garden statuary of classical or religious icons and subverts material expectation. Based on ancient Greek and Roman statuary and poised atop a cast concrete pedestal, the statue will be sandblasted to expose the concrete’s aggregate innards, forcing decay on presumably permanent concrete. Matelli then stages trompe l’oeil edibles—such as immaculately ripened melons, avocados, blackberries, and asparagus, as well as ready-to-eat cocktail shrimp, crab claws, and sausages—upon the weathered ruins of symbolic effigies, such as those of Jesus, Buddha, and Hermes. These flawlessly painted cast-bronze perishables, presented in an eternal state of freshness, balance upon the intentionally eroded and debased concrete figure’s creases, folds, and at its feet. In doing so, Matelli stages opposing entropic forces, the synthetically preserved, and the forcibly decayed.

Spanning sculpture and painting, Matelli’s hyperreal practice embodies the human condition. Suspended in changing physical states or transformative stages of existence, his work concerns the very circumstance of actuality, joining the ordinary with the speculative in order to assess cultural worth: what people keep or abandon, what appears to be in or out of place, and what seems pleasing or distasteful. Often provocative and hallucinatory, Matelli’s work expresses excess, neglect, decomposition, and regeneration, the upturned and the adrift, the romantic and the surreal. At The Aldrich, Matelli’s colossal sculpture of a familiar mythological figure may read as a modern memento mori, or as a devotional offering to a saccharine present, cast against a corrosive past. Ridgefield, a Revolutionary-era Colonial town with a landmarked Main Street, is a befitting location for this tragicomic siting, as Matelli’s ancient giant testifies to history as theatrical backdrop.

Tony Matelli (b. 1971, Chicago) received his BFA from the Milwaukee Institute of Art & Design in 1993 and his MFA from the Cranbrook Academy of Art in 1995. Recent solo exhibitions include the State Hermitage Museum, St. Petersburg, Russia; the Davis Museum, MA; Künsterlerhaus Bethanien, Berlin; and the Palais de Tokyo, Paris. A mid-career survey, Tony Matelli: A Human Echo, premiered at the ARoS Aarhus Kunstmuseum, Denmark in 2012 and traveled to the Bergen Kunstmuseum, Norway in 2013. His work is in numerous public collections including the FLAG Art Foundation, NY; ARoS Aarhus Kunstmuseum, Aarhus, Denmark; and the National Centre of Contemporary Art, Moscow, Russia, among others. He lives and works in New York City.

Join The Maritime Aquarium @ Norwalk Tuesday, June 14 for this special after-hours event – hosted by Science Friday's Ira Flatow – in celebration of Cephalopod Week! They will begin the evening by enjoying appetizers and drinks during a meet-and-greet, followed by a screening of short science documentaries (plus, a new 4D film "Octopus: Blue Planet II 4D Experience!") and an interview hosted by Ira with two very special squid-y guests. For tickets https://www.maritimeaquarium.org/sciencefriday
Still time to purchase tickets for the Litchfield Historical Society's Garden Tour of historic North Street. for the scoop check out our new blog https://westernconnecticut.blogspot.com/2022/05/litchfield-garden-tour.html
#MedicinalMonday from the #instituteforamericanindianstudies - Pleurisy Root can be found in the Eastern United States and was used by many Native American communities to treat a variety of ailments and is still used today in modern medicine. To find out more https://nativeamericanmuseum.blogspot.com/2022/05/medicinal-mondaypleurisy-root.html
There is an Opening Reception at Gallery SHS
Today, May 5th marks the National Day of Awareness for MMIWG&2S (Missing and Murdered Indigenous Women, Girls, & Two-Spirit). Tonight, at 7:00pm (est) IAIS is hosting a Virtual Discussion of the 2022 documentary Bring Her Home.
Sheffield Island and Lighthouse in Norwalk gets ready for the summer season...check out our new blog for all the details. https://westernconnecticut.blogspot.com/2022/05/sheffield-island-gets-ready-for-summer.html
Loading Comments...
%d bloggers like this: