Ann Hampton Callaway one of the leading champions of the great American Songbook, plays an exclusive one night only date Friday February 10 at the Palace Theater’s intimate Poli Club. Part of New England Arts & Entertainment’s Winter Jazz Series, Hampton Calloway will perform two shows that evening at 7:00 and 9:00 pm. 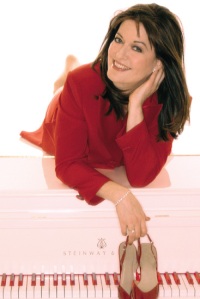 Having made her mark as a singer, pianist, composer, lyricist, arranger, actress, educator, TV host and producer Hampton Calloway was recently voted by Broadwayworld.com as “Performer of the Year,”. Ann is a natural entertainer. Her unique singing style that blends jazz and traditional pop has made her a mainstay in concert halls and jazz clubs as well as on television and film. She is best known for her Tony-nominated performance in the hit Broadway musical Swing! and for writing/singing the theme song to the hit TV show, The Nanny.

Ann has been a special guest performer with Wynton Marsalis and the Lincoln Center Jazz Orchestra; with Keith Lockhart and the Boston Pops at Symphony Hall; Tanglewood; and is featured at many of the Carnegie Hall tributes. She has sung with more than thirty of the world’s top orchestras and big bands, and has performed for President Clinton in Washington, D.C. and at President Gorbachev’s Youth Peace Summit in Moscow.

Callaway’s live performances showcase her warmth, spontaneous wit and passionate delivery of standards, jazz classics and originals. She is one of America’s most gifted improvisers, asking for words and phrases from the audience and creating songs on the spot.

To sign up for a monthly newsletter on what to see and do in Litchfield Hills and Fairfield County visit www.litchfieldhills.com

Go on a mushroom foraging hike July 9 in Salisbury...check out our new blog for all the details https://westernconnecticut.blogspot.com/2022/06/go-on-mushroom-walk-sugar-hill.html
#MedicinalMonday - Wild Bergamont find out the many ways this fragrant perennial that is native to most of North America is used...https://nativeamericanmuseum.blogspot.com/.../medicinal... the number of uses is surprising!
Sunsets and Summer go hand in hand... go on a sunset cruise this summer with the #NorwalkSeaportAssociation https://westernconnecticut.blogspot.com/2022/06/norwalk-seaport-association-offers.html
Happy Summer - Hollister House and Garden, Washington CT
Floral Art - Sunflowers are the very embodiment of summer. The sunflower has many meanings across the world. Different cultures believe it means anything from positivity and strength to admiration and loyalty. In Chinese culture sunflowers are said to mean good luck and lasting happiness, in the Ukraine it is a symbol of peace, and Native Americans communities in North America celebrate sunflowers in their harvest festivals. Check out our colorful sunflower that is made from multiple layers of reed and framed by a bittersweet vine. Check out our website http://tinasbaskets.com for more information.
Loading Comments...
%d bloggers like this: