The Ives Concert Park located on 43 Lake Ave. Extension in Danbury Connecticut is hosting a fabulous event, Music Fest America on September 10 featuring Bela Fleck and Chris Thile. Music Fest America will celebrate our nation’s musical traditions, presenting free performances from 3 to 5:30 p.m. on two stages at Ives Concert Park. Appearing will be Six String Soldiers and some of Connecticut’s best bluegrass, jazz, folk, roots, gospel and classical artists. After a brief intermission, the Ives gates will re-open for paid ticket-holders at 6 p.m. for an evening of unforgettable music from Bela Fleck and Chris Thile on the Ives gazebo stage.

Just in case you aren’t familiar with Béla Fleck, there are some who say he’s the premier banjo player in the world. The 15-time Grammy Award winner has been nominated in more categories than any other artist in Grammy history, and remains a powerfully creative force globally in bluegrass, jazz, classical pop, rock and world beat. He performs, in banjo duet with Abigail Washburn, and back to bluegrass with his old friends Sam Bush, Jerry Douglas, Stuart Duncan, Bryan Sutton and – with Béla Fleck and the Flecktones, who continue to perform together 25 years after the band’s inception. And now, for the first time… with Chris Thile! 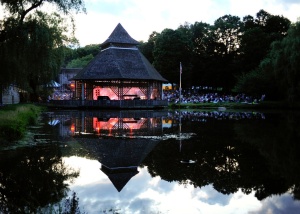 Multiple Grammy Award-winner and MacArthur Fellow Chris Thile, a member of Punch Brothers and Nickel Creek, is a mandolin virtuoso, composer and vocalist. With his broad outlook that encompasses classical, rock, jazz, and bluegrass, Thile transcends the borders of conventionally circumscribed genres, creating a distinctly American canon and a new musical aesthetic for performers and audiences alike. Thile’s talents also shine on the beloved public radio show “A Prairie Home Companion,” where he will be taking over as host from the legendary Garrison Keillor this October.

For more information and a complete schedule www.ivesconcertpark.com and for more area information www.litchfieldhills.com