Fairfield is rolling out a red, white and blue carpet on July 10 from 10 a.m. to 4 p.m. that promises to be fun for the whole family. The day begins on the historic town green to celebrate the final day of the display of the Declaration of Independence. Pack a picnic lunch or enjoy food from a food truck from 1 a.m. to 1 pm. while enjoying crafts, games and even a British encampment. 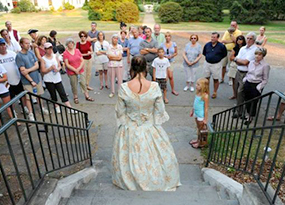 The British encampment that will simulate what Fairfield looked like when the redcoats invaded. Participants will experience life during the Revolutionary War by visiting with members of the 54th CT Regiment of Foot, a British regiment like the ones who invaded Fairfield in 1779. The members of the 54th will set up a British soldier’s encampment, explaining the equipment that was likely used during the British invasion of Fairfield as well as demonstrating the manual of arms. There might also be a need to proclaim the “King’s will” to those in attendance while being part of the force occupying the town for the day! 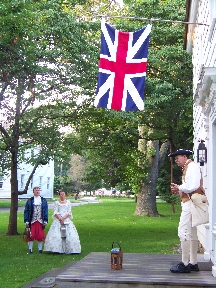 This walking tour brings the burning of Fairfield back to life as your guide explains the history and events surrounding the attack on Fairfield by the British on July 7-8, 1779. Participants will listen to the Proclamation from the British General William Tryon and Admiral Collier, to the people of Connecticut. You will hear the anguished words of Eunice Burr, as she witnesses the ransacking and destruction of her home, at the site where it happened. Young William Wheeler’s voice speaks to you of his family’s struggle to evacuate the town and his feelings of pride at the heroic actions of the local militia and the Fort at Black Rock as they work to fend off the Crown Forces. The walk ends with the somber after action report of Reverend Andrew Eliot as he reflects on the events of those two days in July, and their meaning for the town and its future. This popular event is one that is not to be missed.