On May 7 from 3 p.m. to 4:30 p.m. Edward F. Gerber, Past President of the Westport Historical Society, will host a walking tour of the Kings Highway North Historic District. The tour will be an opportunity for history buffs to learn about one of the town’s oldest settled areas, some homes of which date to the mid-1700s. 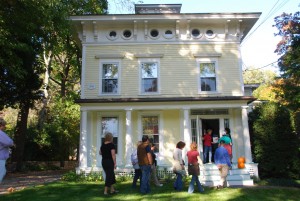 Gerber said he will talk about the style of the houses and the fact that, although they were built from the early 1700s to the mid-1900s, “you can’t tell the later houses from the older ones. The architects did a good job of blending old and new.”

Kings Highway North was established as a local historic district in 1972 and named to the National Register of Historic Places in 1998. It encompasses 106 “contributing buildings” – structures that add to the district’s historical qualities – and four historic sites. Most of the contributing buildings are homes in the Colonial style.

The historic sites include a small triangular green at the intersection of Old Hill Road and Kings Highway North that was used as a military drill ground, the adjoining Christ and Holy Trinity and Church of the Assumption cemeteries across Kings Highway from Old Hill Road, and an earlier graveyard, laid out in 1740, at the northwest corner of Kings Highway North and Wilton Road. Originally, Kings Highway North was part of a postal road laid out between New York and Boston in 1762. Unlike the Post Road, which was built later, it followed a circuitous route through town, crossing the Saugatuck River over an old wood bridge just upstream from the present one.

Gerber will be accompanied on the tour by Edward Hynes, a specialist on the history of Westport during the American Revolution. Hynes will discuss the planned ambush by Continental troops under Benedict Arnold to fire cannons from the high ground on Old Hill down on British soldiers returning from a raid on Danbury to prevent them from crossing the river on the bridge below. But the British outsmarted the Colonials and crossed upriver near the site of present Ford Road. All tour goers are invited to a complimentary beer tasting at Rothbard Ale and Larder 90 Post Road East following the tour.

Meet across from the cemeteries at the foot of Old Hill Road; park along Kings Highway North. May 7, 3 pm. $10 suggested donation. No charge for children 12 and under. Reservations are recommended: (203) 222-1424, http://westporthistory.org. For more area information www.visitfairfieldcountyct.com