Western Connecticut State University will celebrate its popular spring tradition in bringing the world’s leading jazz artists to perform in Danbury as it presents the 21st annual WCSU Jazz Fest from March 31 through April 2 featuring the legendary saxophonists and composers Joe Lovano and Kenny Garrett.

This year’s Jazz Fest, presented by the WCSU Department of Music with support from the Student Government Association, will showcase the virtuoso performances and visionary original compositions of two artists widely recognized to be among the most influential and sought-after jazz saxophonists during the past three decades.

Lovano, a tenor saxophonist and bandleader who has recorded two dozen albums on the Blue Note label since 1990, will perform with the WCSU
Jazz Orchestra at 7 p.m. on Friday, April 1. Garrett, an alto saxophonist who began his career performing with leading jazz musicians of the 20th century and has established his own distinctive sound in recordings as a bandleader and composer over the past two decades, will appear with the Kenny Garrett Quintet at 7 p.m. on Saturday, April 2.

Both performances will be in the Veronica Hagman Concert Hall of the Visual and Performing Arts Center on the WCSU Westside campus, 43 Lake Ave. Extension in Danbury. General admission prices will be $15 for the Friday concert and $20 for the Saturday concert; admission will be free for WCSU students with valid ID. The WCSU jazz music faculty and students will perform ensemble sets featuring jazz classics and original works in the opening Jazz Fest concert at 7 p.m. on Thursday, March 31, in the Veronica Hagman Concert Hall. Admission will be $10, or free for WCSU students with ID. Reservations for all concerts are available at www.wcsuvpac.eventbrite.com.

A native of Cleveland who began playing saxophone as a teen at jazz clubs with his father, Lovano developed his appreciation for modal harmony in performance during his studies at Berklee College of Music and his continuing work on the Boston jazz club circuit. His emerging reputation as a jazz saxophonist received a major boost with his call in 1976 to join the all-star group assembled by bandleader Woody Herman for a three-year gig touring the United States and Europe and playing at prestigious international jazz festivals.

Lovano’s career as a bandleader and composer blossomed in the 1980s and 1990s as he settled into the vibrant New York jazz scene, entering musical collaborations with the Mel Lewis Orchestra at the Village Vanguard and many of the jazz world’s elite musicians including Bob Brookmeyer, Charlie Haden, Paul Motian, John Scofield. Gunther Schuller, Herbie Hancock, Carla Bley and McCoy Tyner. Bruce Lundvall of Blue Note Records, which signed Lovano to a recording contract in 1991, said that when he first heard the saxophonist in performance, “I felt that he was the most creative and hard-swinging tenor player I’d heard in years. Joe has emerged as a giant on his instrument and a full-fledged giant of jazz.”

Lovano credits his musical and life partnership with jazz vocalist and composer Judi Silvano as an inspiration for his continuing exploration of new ways to blend vocals, woodwinds, brass and percussion in his compositions. The biographical notes on his website observed that Lovano constantly experiments with new ensembles and formats in recordings and concerts, following “his lifelong regime of practicing, jamming and trying new sounds. The secret to his success is his fearless ability to challenge and push the conceptual and thematic choices he makes in a quest for new modes of artistic expression, further defining the jazz idiom.”

Garrett receives equally wide acclaim for his contributions to the contemporary jazz scene as both a preeminent artist on the alto saxophone and a bandleader who continuously explores diverse international musical genres for inspiration and new stylings in sound and rhythm that have found unique expression in his boldly innovative compositions.

“When I was in high school and college, delving into jazz music during the 1990s, I found that Kenny was one of the most widely emulated saxophonists among my peers — and for good reason. He has without doubt one of the most personal, distinctive and beautiful alto saxophone sounds ever,” Greene remarked. He recalled that he and Garrett shared a common mentor in the legendary jazz artist and educator Jackie McLean, who taught Greene during his studies at the Hartt School of the University of Hartford. “When I asked Jackie to name his favorite younger sax players at the time,” he said, “one of the two performers he mentioned was Kenny Garrett.”

A Detroit native who landed his first major gig with the Duke Ellington Orchestra led by Mercer Ellington, Garrett’s musical development came in the company of jazz giants including Freddie Hubbard, Woody Shaw, Art Blakey and the Jazz Messengers, and Miles Davis. His many album and performance collaborations have included the Grammy Award-winning Five Peace Band with guitarist John McLaughlin, pianist Chick Corea, bassist Christian McBride and drummer Vinnie Colaiuta, and the Freedom Band with Corea, McBride and drummer Roy Haynes.
His own success as a composer and bandleader since the 1990s has been capped by two Grammy Award nominations for his 2012 album “Seeds from the Underground” and a third nomination for his 2013 release “Pushing the World Away,” as well as his 2012 selection to receive the Echo Award as Saxophonist of the Year. Cover notes for “Seeds from the Underground” said that his original compositions for that album paid “homage to those who have inspired and influenced him, both personally and musically. Garrett has crafted a project that offers his appreciation while always making the listener aware of his band’s skillful approach to melody, harmony and rhythm. Like all successful bandleaders, Garrett knows what he wants musically and has formed a band that will best communicate his message.” 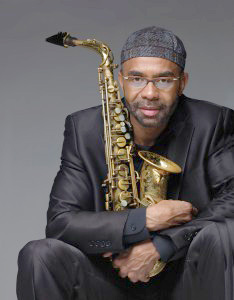 Garrett draws extensively upon his familiarity with world music genres to broaden and push the envelope of jazz composition. “I love the challenge of trying to stay open about music and about life,” he said in the “Seeds” album notes. As a composer, “I don’t try to control what I write. Music comes from the Creator. It’s a gift that’s coming in, and I receive it. I write in all genres, and I’m writing all the time. It’s never about what it is — I just say, ‘Thank you.'”