Torrington was established when the Colony of Connecticut granted to Windsor, Connecticut several townships including Torrington. Ebenezer Lyman Jr. of Durham purchased land from one of the Windsor proprietors and in 1735 became Torrington’s first settler. The first school, store, church and tavern were built high on the hills, west of the Naugatuck River, near the homes of the earliest settlers. The second area to be settled was the eastern hill known as Torringford. These hills provided the best farmland for the settler’s agricultural work. In October 1740, Torrington was given permission to incorporate as a town and organize its own town government and ecclesiastical society. 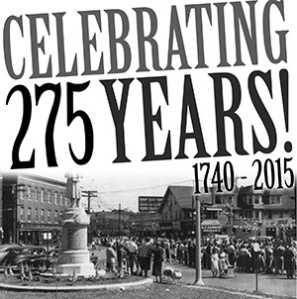 Due to it’s location on the Naugatuck River industry began to develop in the 19th c. using waterpower. In 1813 a woolen mill was built that attracted a large workforce and Torrington continued to grow. The site of the woolen mill is the center of Torrington today. The population continued to grow due to the construction of two brass mills on the river in 1834 and by 1849 the Naugatuck Valley railroad was completed thorough Torrington.

The railroad linked Torrington with other population centers, ending its isolation and stimulating industrial development. Soon Torrington was producing a vast array of metal products including needles, brass, ice skates, hardware, bicycles, and tacks. English, German and Irish immigrants contributed to the growth of the community in the mid nineteenth century. Torrington’s growing industrial plants continued to attract immigrants through the early 20th century. As immigration from southern and eastern Europe increased, Torrington’s population exploded from 3,000 to 22,000 between 1880 and 1920. New immigrants during this period included the Poles, Czechs, Slovaks, Italians and Lebanese. In 1923, with a population of 23,000, Torrington was chartered as a city.

To celebrate it’s 275 Birthday on October 17 from 12 noon to 5 p.m. the city has planned a variety of events to commemorate this milestone on Main Stree in Torrington. Notable residents from Torrington’s past are sure to entertain and will read from scripts written by professional playwright, Charlene Donaghy. There also be the “best of the best” antique car show in the he municipal parking lot next to City Hall. To add to the fun, the Survivors Swing Band will be playing the great old tunes of the 1920s through 1940s on the steps of City Hall and Tom Hooker Hanford will provide historic musical entertainment. There will be plenty of food to buy including ethnic specialties located behind City Hall on Main St.
Party goers will be invited to take a horse-drawn wagon rides through Center Cemetery, the final resting place of some of Torrington’s former movers and shakers as well as to tour the Torrington Historical Society.