The homes that will be open to the public on September 12, 2015 are as follows: 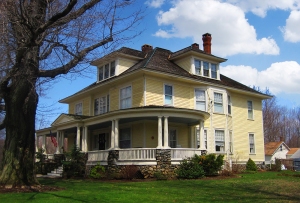 The George B. Goodwin House is a Colonial Revival Built ca. 1908. This Colonial Revival farmhouse replaced a much older farmhouse that was once known as the Waterman Farm. The house has a hip roof, dormers and a first floor wrap around porch. Inside the house retains many original features and has been attractively decorated and furnished as a bed and breakfast inn.

The Doolittle House / Excelsior Dairy Ca. is a 1850 Greek Revival house. Historically known as the Doolittle Farm, this mid-nineteenth century farmhouse was likely built by Nathan B. Phelps around 1850. The house was constructed in the Greek Revival Style with its gable end facing the street. The current owners have restored the 1850 house, preserving the original moldings and wide floor boards. Contemporary additions utilize original architectural detailing while providing for modern conveniences and the entire home is tastefully furnished and decorated. 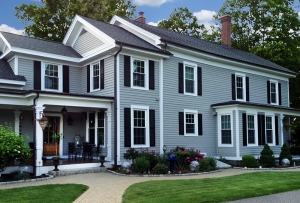 The Cavagnero House built in 1956 is a Mid-Century Modern house. This home with its distinctive modern style, highlighted by shed roofs, stands out in a neighborhood of more traditional ranch houses. The design is based on a home in Spokane Washington and this house was hand built by the first owner, Chet Cavignero and his cousin. The interior is largely original and features a period kitchen, bathroom and living room. The present owners have decorated the entire house with historic furnishings from the 1950s.

Major William E. Besse House ca. 1890 Victorian, Stick Style This home was built by Albert P. Hine around 1890 and was acquired by William E. Besse in 1903. The stick style is characterized by a steeply pitched front gable and exterior decorative banding. William E. Besse was superintendent of the Brass Mill and lived here until 1954. The home is a well preserved example of this unusual type. Once utilized as an office, the current owner’s have restored the interior of the home to its turn of the century appearance while adding a modern kitchen at the rear. The home is decorated it with many period furnishings and fixtures.

The Bronson House is an 1860 Italianate style house. This home was built by Luther Bronson around 1860 as a residence for him and his wife Flora. The house is a fine, well-preserved example of an early Italiate structure in Torrington. Since 2002 it has been restored and many made major improvements were made to the kitchen. The house is beautifully decorated and furnished.

The Seventh Day Adventist Church is a 1889 Victorian Gothic structure. This church was completed and dedicated on June 5, 1889. It was used by the Seventh Day Adventists until they built a new church in 1969. The old church was sold and has been home to a number of artists over the last 45 years. Today the main floor of the church serves as a performance studio for pianist, Timothy Alexandre Wallace. The building retains much of its original exterior decorative detail and the interior furnished is an interesting and eclectic blend of overstuffed chairs, tapestries and a grand piano.

Tickets for the historic house tour are $30 each and may be purchased in person at the Chamber of Commerce or at the Torrington Historical Society. On line ticket sales are available through the Torrington House Tour website: www.torringtonhousetour.org.

A House Tour Preview Party featuring a tour of several homes followed by a reception with music and refreshments will be held on Friday evening September 11th from 5 to 9 pm. Tickets for the preview party are $75 and include one ticket to the complete tour on Saturday.