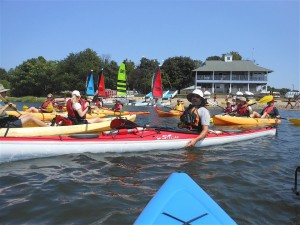 On Saturday, Saturday, August 18, from 1-3:30 pm the Westport Historical Society is hosting their 3rd annual kayak tour to Cockenoe Island lead by author David Park. The tour group will meet at Longshore Sailing School, Longshore Park, in Westport Connecticut. The cost to participate is $20 for non-members of the Historical Society and $18 for Members. The Raindate is August 19. Kayak rentals are available from Longshore Sailing School, for reservations, call 203-226-4646. Intermediate level kayak ability is required.

Cockenoe Island, is a 28 acre island one mile off the coast of Westport. The tour will be led by David Park, board member of the Norwalk River Watershed Association and author of the guidebook “Kayaking in and around the Norwalk Islands.” This year, the tour is being offered in conjunction with the Westport Historical Society’s current exhibit “The Sound and the Saugatuck” which runs through September 1st.
Cockenoe Island is open to the public thanks to the hundreds of Westport residents and town officials who fought against the proposed construction of a nuclear power plant back in 1967. The plan was brought forward by the United Illuminating Company who had purchased the island a year earlier from the Smith family, the owners of the island at the time. After the plan was defeated, the town of Westport purchased the island as open space and it is now enjoyed by all types of recreational users and nature enthusiasts. The acquisition was heralded as a significant conservation victory for the nation by Life Magazine.

The tour group will land on the island for a stroll and hear about how the Saugatuck River watershed effects the water quality of Long Island Sound and wildlife of the Norwalk Islands. Cockenoe Island is of particular interest because of the current conservation efforts and successful nesting colonies of egrets, herons and terns

Copies of “Kayaking in and around the Norwalk Islands” is available for $10 at the WHS Remarkable Gift Shop, 25 Avery Place in downtown Westport.

About the Westport Historical Society

The Westport Historical Society, founded in 1889, is an educational organization dedicated to preserving, presenting and celebrating the history of Westport, Connecticut. It is committed to increasing awareness of the importance of preserving our town’s heritage and its historic buildings and landmarks.

Wheeler House is the Society’s headquarters, at 25 Avery Place, Westport, Connecticut, was purchased in 1981. The house, built in 1795, was remodeled in the Italianate style in the 19th Century and is listed on the National Register of Historic Places and the Connecticut Register of Historic Places. The house has three Victorian Period rooms and a gift shop. The only octagonal-roof, cobblestone barn in Connecticut, which is on the property, was completely restored over a ten-year period and houses the Museum of Westport History displaying a diorama of the town as it looked toward the end of the 19th Century. For additional information on programs visit www.westporthistory.org.

The Annual Secret Gardens Tour benefiting the New Canaan Nature Center will take place on Friday, June 8. The popular tour is a fund-raiser for the New Canaan Nature Center and an opportunity for homeowners, gardeners and anyone who appreciates the beauty of the outdoors to be inspired by several outstanding garden settings. The self-guided tour takes place between 10:00a.m. – 4:00p.m., allowing attendees to visit the gardens at their own pace and on their own schedule.

This year’s tour will feature a variety of spectacular New Canaan gardens representing the past, present and future of landscape design. Gardens will include historic estates with meandering garden “rooms,” newly-designed and transformed landscapes and grounds incorporating the latest sustainable practices and plantings. In addition to hundreds of varieties of annuals and perennials, attendees will see a wide variety of majestic specimen trees, unique water features, and delightful woodland gardens.

New Canaan Nature Center is pleased to welcome Elise Landscapes & Nursery and the Bank of New Canaan as the lead sponsors of the tour. Mark Hicks of Elise says “The Secret Gardens Tour is a New Canaan tradition that we are thrilled to support, and we see this as a terrific opportunity to reach out to those who are passionate about garden design and appreciate spectacular landscaping.”

Tour tickets are $75 including lunch or $50 for the tour only. The tour lunch will be available at the New Canaan Nature Center or to take and enjoy while touring the gardens. The lunch is sponsored by Hobbs, Inc., Austin, Patterson, Disston and Devore Associates. Tour tickets will be $60 on the day of the tour. Tickets can be purchased at the New Canaan Nature Center, by calling (203) 966-9577 x50, or online at www.NewCanaanNature.org starting May 1.