Before the days of television and mass media, baseball had distinctly local roots. Passionate fans in small towns across the nation turned not to Yankees, Dodgers, or Red Sox for their baseball fix, but to their local semi-pro or minor league teams and the new exhibit presented by the Wilton Historical Society called Farm Team: 50 Years of Wilton Baseball explores these roots. The history of Wilton Baseball traces the story of the Farmers, Wilton’s quintessential small town baseball team, through approximately 20 photographs and objects related to the team. 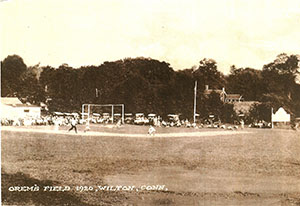 Founded in 1921, the Farmers quickly became one of the most popular attractions in town. Crowds could reach up to 1,000 people, or roughly half the population of Wilton at the time. The Farmers played teams from as far away as Poughkeepsie, New York, and their games were front page news in The Wilton Bulletin. “I have to say, one of my favorite things about the Farmers is how much fun they had. There are some great stories about their wacky promotions, including donkey baseball,” said Nick Foster, exhibition curator.

There would have been no Farmers team without Charlie Orem (1882 – 1973), owner of Orem’s Dairy and later Orem’s Diner. Orem, along with Johnny Knapp and Charlie Myers, founded the team as a way to bring in customers for Orem’s businesses. Orem built a baseball diamond on a piece of his farm land, soon named Orem’s Field, where the team would play its home games. Fans in attendance were encouraged to buy concessions from the dairy and diner located next to the field. The team, sensibly named the Farmers after their founder and home field, remained in Wilton, in one form or another, until 1970, with only a small break during World War II.

The Wilton Historical Society is located on 224 Danbury Road in Wilton. For more information visit their website.

Tune in tomorrow, March 4 at 5:30 to learn about Norwalk's Oyster Industry - check out our new blog for details https://janetserra.com/2021/03/03/oystering-in-norwalk-connecticut-norwalk-historical-society/
The Derby Historical Society is offering a class in Open Hearth Cooking. Saturday, March 27, 2021, 11 am - 2 pm. This program was so popular that the talented Maria Schreiner is returning for another session! Each person will assist in cooking an entree and a dessert in our fireplace, and you get to enjoy the meal after building up an appetite! $25 per person.
#IntheNews - This Saturday attend an in-person maple sugaring workshop at #InstituteforAmericanIndianStudies...thanks #sarahcody #WTNH #news8 https://www.wtnh.com/on-air/8-things-to-do/8-things-to-do-this-weekend-cross-country-ski-goat-stroll-and-sophie-b-hawkins-concert/
Savor Connecticut with the #naugatuckhistoricalsociety check out our blog on how to participate and enter a contest to win a free dinner and Historical Society membership https://westernconnecticut.blogspot.com/2021/02/sav-r-ct-jesse-camilles-restaurant-in.html
Celebrating #washingtonsbirthday🇺🇸 Do you know where #GeorgeWashington's horses slept in Connecticut? Check out our blog to find out! https://westernconnecticut.blogspot.com/2021/02/george-washington-slept-in-many-places.html
Can’t make it to Jumpfest this year? Well, no worries cause we’re live-streaming the action Friday, Saturday, and Sunday! Just go to https://www.jumpfest.org and click on the YouTube Live stream button. And while you’re there, feel free to click on the Donate button- that will really help them out. Here Ian Johnson shows volunteers how to work the camera.
Loading Comments...
Comment
×
%d bloggers like this: